Heading north to escape the heat is a summer ritual many Phoenicians participate in.  Most head to the higher elevations of Northern Arizona where temperatures typically are ‘only’ in the 90’s during the day but cool off to a nice 50 or 60 at night or towards San Diego where we are affectionately? know as Zonies.  Hey, it beats highs of 110 and lows in the 90’s.

Wooly and Raeski have also been known to follow the ritual of heading north.  However Wooly sometimes likes to go the extra mile, or in this case, the extra 1,600 miles.  Not only did we escape the heat, there were times we were downright cold.

Like the time we stood on the Athabasca Glacier in Alberta Canada.  The glacier flows from the Columbia Icefield which happens to be the largest ice mass in North America south of the Arctic Circle.  How large is it?  It’s big, very big.  It covers a 130 square mile area and has a maximum depth of 1,200 feet which is about the height of the Empire State Building.

It was a great day when we stood on the Athabasca Glacier.  We were taken onto the ice in these massive buses to an area where it is safe and we didn’t have to worry about falling into a crevasse.  Standing on the ice with the Columbia Icefield towering over us was very cool.  Well, actually it was quite cold since cold air has the pesky habit of flowing down.  And guess where all the cold air was blowing that day.  Yup, right down the glacier where we stood.

And if you are wondering if this glacier is retreating the answer is yes – as all the glaciers fed by the Columbia Icefield are.  Since the industrial age began the Athabasca has retreated 1.5 miles and the rate of ice loss is accelerating.  And yes, Wooly and Raeski agree with the climate scientists that say that human activity is a major contributor to climate change.  When 95% of all climate scientists agree on this, one must question why the other 5% are still in disagreement.  Perhaps it’s because of who pays them.

Enjoy the show of water in one of its purest and most ancient forms.  Glacial ice.

Athabasca Glacier is one of the five major glaciers feeding from the Columbia Icefields. 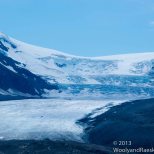 The triple cascade of the Athabasca Glacier.

Those dots on the glacier are people and the giant sized ice buses.

Legend says that drinking the water from the Athabasca Glacier will add 10 years to your life. Hey, it’s worth a shot.

Brr. The wind is blowing down from the Columbia Icefield as Wooly and Raeski pose for the camera on the Athabasca Glacier and it’s cold!

Another glacier flowing from the Columbia Icefield. 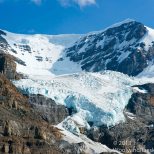 The Columbia Icefields feeds a glacier sliding down a mountain. 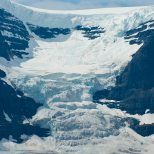 The Dome Glacier is one of the many ‘minor’ glaciers feed by the Columbia Icefield.

It should have been a beautiful drive.  We were expecting a lush green spruce forest.  We thought we would be able to stop along the way and photograph the grandeur of the Rocky Mountains.  Instead we were greeted by signs stating there is absolutely no stopping for the next 35 miles.

We were in luck today because Wolf Creek Pass in Colorado was open.  The forest fire was no longer threatening the road and anyone on it.  The pass itself should be one of beauty, lush forest and grand mountains.  While the mountains were still there the forest wasn’t.

For over twenty miles we drove through a forest of dead trees.  There was only an occasional live tree showing its green needles among the sea of dead trees.  So why are all the trees dying?  There is no single answer to the problem.

First there has been almost 100 years of mismanagement of the forest.  For years the prevailing method of management was to try to extinguish every fire that started.  Early on this worked in conjunction with logging.  Timber companies cut the large trees and thinned the forest while the forest service fought every fire.  As time passed logging companies went out of business due to environmental restrictions that made it impossible to make a profit while the Forest Service still fought every fire.

But a new threat was on the horizon that was not anticipated.  The population of the tiny spruce bark beetle exploded and they are attacking the trees.  But that is what they have done for as long as the trees have been there.  They prefer older weak trees and dead trees.  They bore into the tree and lay their larva which feast on the trees.  In a healthy forest the trees can withstand the beetles and only a few die.

But what has changed to allow the beetles to thrive and their population explode?  Only two things will kill these beetles in large numbers; fire and temperatures of -30F.

What has changed is two decades of drought and increasing temperatures.  Yes, GLOBAL WARMING is a significant factor that has allowed the beetle population to explode.  Temperatures don’t get cold enough in the winter to kill the beetles anymore.  The last two decades of drought and heat have severely weakened the trees and their ability to withstand the onslaught of the beetle.  With warm winters and more dying trees nothing stands in the way of the beetles killing the rest of the trees.

Except for one thing…  Sadly the only way out of this mess is may be to let entire forests be consumed by fire; the other way massive numbers of these beetles can be killed.  The entire forest is a tinderbox waiting for a spark.  And when that spark happens the fires roar to life and grow by tens of thousands of acres in a single day.  And while our children wait 30 to 40 years for the forest to come back they get to look at hillsides that are either barren or showing the first signs of revival of Gambel oak or young aspen trees..

Hopefully by then the climate change deniers will be rare and the politicians will no longer listen to the lobbyists who profit from polluting the earth and contributing to global warming.  Until then I would like to force every politician in the U.S. to drive Wolf Creek Pass and view the devastation that comes from their inaction.

Sadly this is not a problem that is isolated in one area.  All the Southwestern forests of the U.S. are slowly dying.  Each type of tree has its own beetle population that is on the rise.  It is not as evident yet, but if you visit these forests look for dead trees.  You will be surprised by the number and maybe angered enough to write your Senators and House representative.  Tell them it’s time to get off their behinds and point the nation in a new direction that embraces solutions that improve the environment.

I give anyone permission to copy and use the two pictures in this story as a visual aid to their pleas to their Representative and Senators to take action and become more environmentally friendly.