Some roads in South America are noted for their zigzags with good reason.  You simply don’t want to take the fast way down.  Here are a couple.  The first is the main highway from Santiago that crosses over the Andes and takes you to Mendoza.  Raeski took this photo from the bus window.  The second dirt road takes you to Machu Piccu.  If you are like most, you wish the bus driver would take it a little slower. 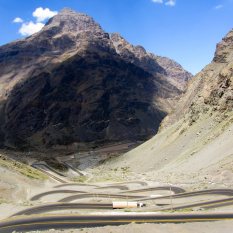 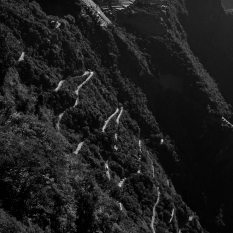 As we flew in over the bay with long running waves that seem to stretch forever I thought this must be a great place to surf when the waves get heavy.  Our drive from the airport to our hotel did nothing to dispel this thought as we rode alongside the beach.  The next day we saw a surfer with his board heading to the water. 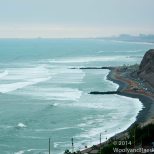 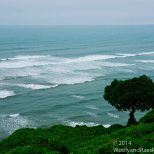 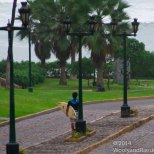 Time to catch a wave.

We stayed in the upscale Miraflores district of Lima.  Most of Lima’s population is poor and are unable to live in such a nice area.  Unlike the U.S., in South America the hills are where poor people live.  Yes, they have a great view from their homes, but poor construction and lack of utilities ensure daily living with hardship.  I know I wouldn’t like having to carry water up a steep hill every day to my home.  It’s a harsh life when you are poor and don’t have access to the things we often take for granted.  This is the life of many in South America that tourists don’t witness.

What most people see when they come to Lima are places like Parque de Amor where they see the famous Victor Delfin statue, “El Beso”, or in English “The Kiss”.  The views are fantastic from the park as are the tile mosaics lining the walkways.  Of course the people in the park are fun to watch as I suppose we were when we emulated El Beso. 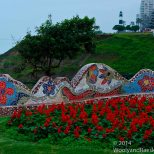 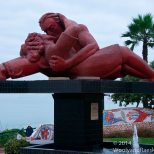 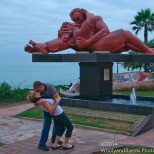 Mmm! Wooly and Raeski test out the park.

Since moving to South America we walk a lot more than we used to and as a result we stumble onto a lot of things other folks don’t see.  In the Miraflores area there is a mall that is cut into the cliff.  What’s nice is the view on top of the cliff isn’t spoiled by a lot of buildings.  Above the mall there is a park overlooking the ocean with stupendous views of the ocean. 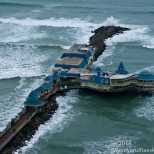 The view from the mall. 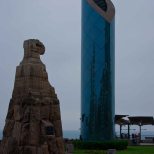 There’s a mall under this. 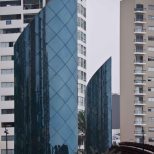 We also walked between Parque de Amor and the mall where we were rewarded with more sculptures, views and oddities.  Painted stairs, a beautiful divided roadway and a rather eclectic door were a few of the things we saw along the walk. 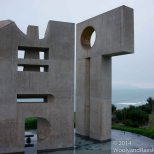 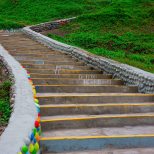 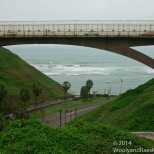 The view after climbing the stairs. 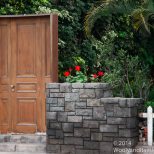 They forgot the house! 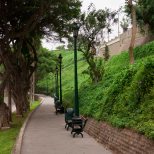 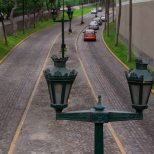 A street in Lima takes you back in time.

In Peru one of the methods people use to draw attention to their cause is by striking.  On the day we were in the main square doctors and nurses were marching for better medical standards, care and pay.  The police were ready and also ready to smile for the camera.  In the same square, as with many squares in Peru, was a cathedral.  There is an amazing amount of wealth to be seen in these churches – something that will be discussed in another post. 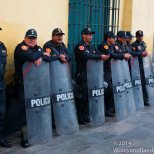 Getting ready for the demonstration 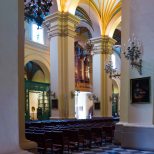 The elegant arches of a Lima church. 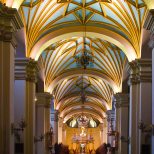 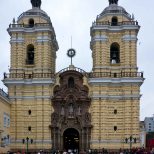 Another square, another church 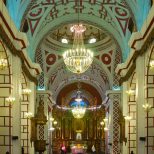 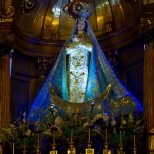 Finally there are Inca ruins being restored in the city.  Since granite wasn’t available in this area the Inca’s used adobe.  While adobe isn’t the best building material to use in a seismic prone area, it is what was available to the Incas and the Huaca Pucllana still stands.  The Incas were truly an amazing people.  Like Raeski, I too wonder what would have happened if the Spaniards and Church hadn’t destroyed their culture. 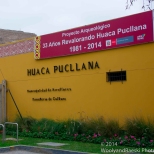 I wonder if the Incas took as long to build it.

A restoration worker removing years of decay from the bricks 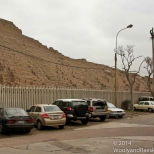 In Lima the modern sits next to the ancient.  You find a well-dressed business person rushing past a person in traditional dress.  Hills filled with the poor overlooking the Spanish colonial homes they can only dream of owning.  Street vendors hawking their goods across the street from a mall filled with efficient Norte Americano stores.  It’s a vibrant place where we started our Peruvian adventure.